Sorry to leave everyone hanging, but it’s been a crazy few months here. I’ve been busy with work and blah, blah, blah…

After all the napping and early-to-bed-ing I’d done the day before, it wasn’t surprising that I was up early. Early enough to see the sunrise, in fact. Sunrise on the Nile is truly a sight to behold, and totally worth getting up early for. 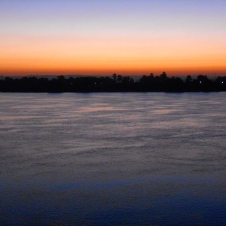 Dawn on the Nile. 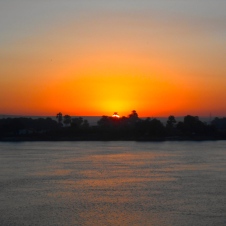 The sun seemed to take forever to peek through the trees. 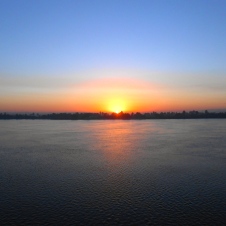 Totally worth a little shivering and getting up really early.

Because we’d such a long day before, Mr. A, Mr. D, and I had decided not to visit Edfu Temple. The temple can only be reached by horse and carriage and they were all lined up waiting to take tourists. Sadly, there were not enough tourists for the carriages that were available. I don’t think anyone told them our group wasn’t going. Oops. 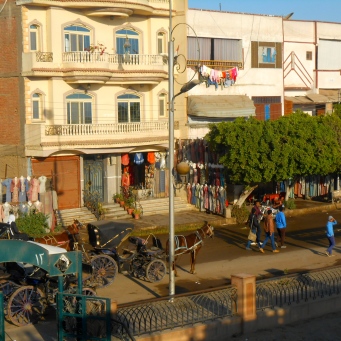 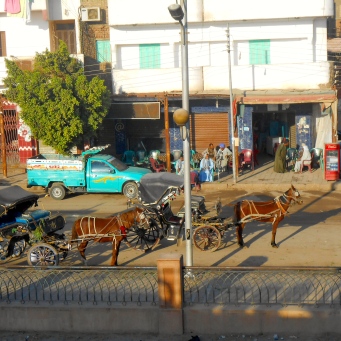 The combination of bells and jingles on the buggies and horses, plus their iron-shod hooves on the pavement makes for quite some noise.

The whole day was calm and peaceful. After everyone else returned from Edfu we had breakfast in the boat’s restaurant. As the boat sailed down river towards Luxor students and teachers had time to relax, sit in the sun, and have some fun. 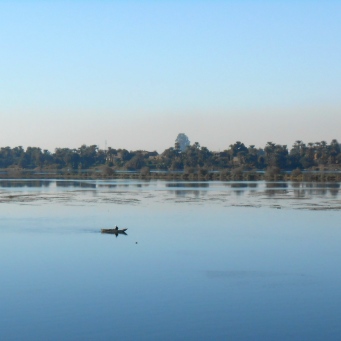 There are still fishermen on the Nile with nothing but an oar and a net. 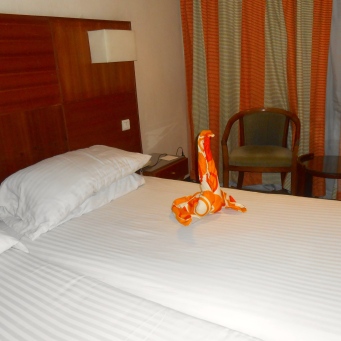 Some students played table tennis on the sun deck, some sat in the lounge chatting, and others watched some tv in their rooms. I had brought a few board games with me and we spent several hours playing Uno, Bananagrams, and some other card games. 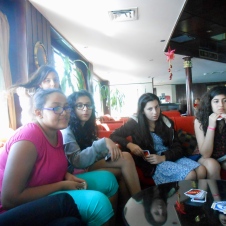 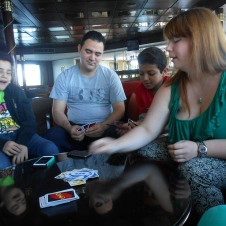 Mr. A didn’t know how to play Uno, so we all had to teach him how. 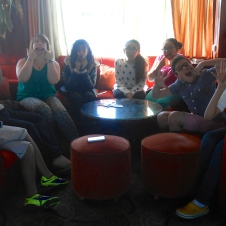 We stopped at Esna Temple along the way to Luxor. A small temple found buried under a local town. We had to climb down some seriously steep steps, and my slight fear of heights reared its ugly head. I had to ask Mr. A to walk down the stairs directly in front of me. He blocked the scary view and helped me keep my balance.  The temple was pretty, and it was kind of interesting to be so far below street level. 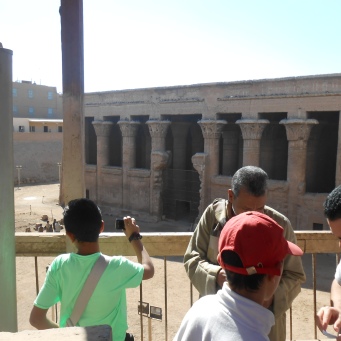 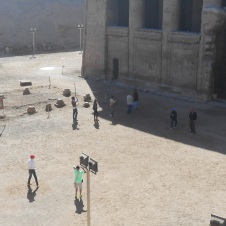 The whole temple has been beautifully excavated and restored. 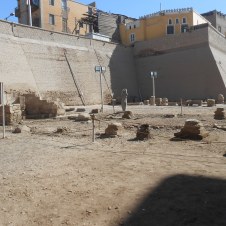 You can see how many homes and businesses had to move to excavate the temple. 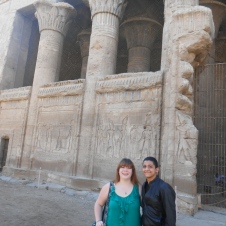 9th grader AR and me. 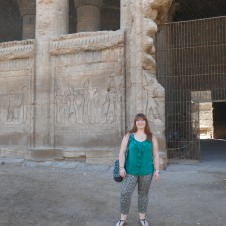 Yours truly at Esna Temple, 10 meters below street level. 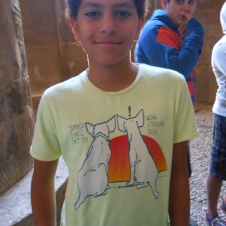 This kid had the funniest t-shirts. 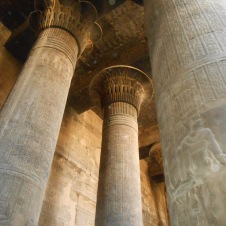 Lunch on the boat was delicious, but uneventful. Naps were had again.

Tea time (3 PM) brought everyone up on deck to bask in the sun, play some games, and chill out. At one point I idly asked the students how old they thought I was. I’m always curious to know how old I seem to kids. I realize that most of them have no real concept of age, and all teachers are simply ‘old.’ I got exactly what I asked for. Guesses ranged from 27 to 37. I refused to tell them my age, only settling for some clues:

We also passed through the Locks, a pretty cool thing to see. Well, after a few minutes of hearing the  hawkers shout about their wares as we all wait for the water level to rise/fall, it gets old. 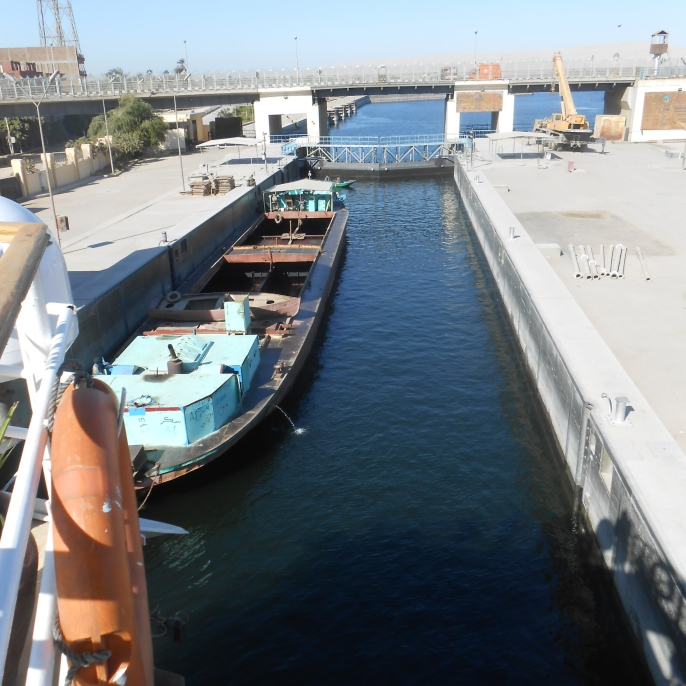 The locks on the River Nile. 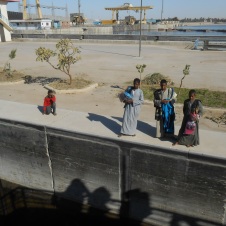 Lots of things for sale! 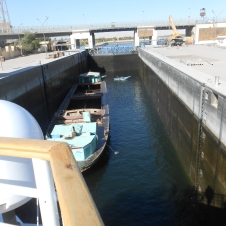 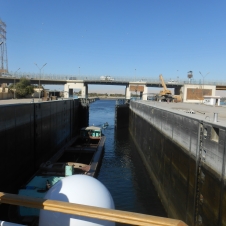 Boats of all sizes and shapes use the locks. 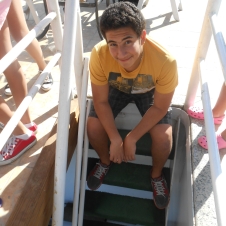 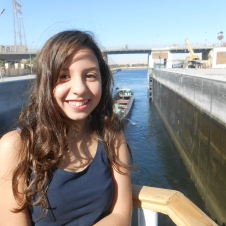 Another student poses for a photo with the locks. 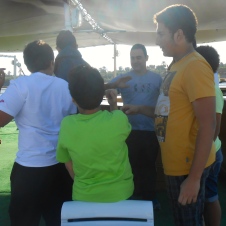 Playing Egyptian games on deck. A lot of them seem rather violent!

Since the day had been so relaxing I agreed to go with Mr. A and take some students out to Luxor market. I didn’t buy any souvenirs but the kids went bananas. Henna tattoos, sand bottles, scarabs, jewelry, scarves… You name it, they bought it. 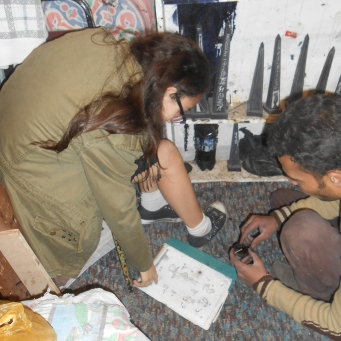 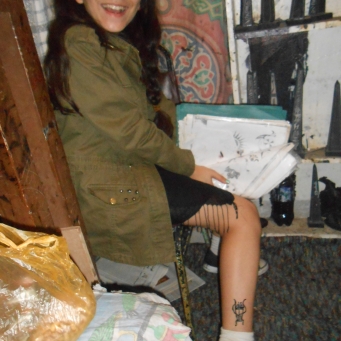 Keeping track of the 10 kids was a little tough, but I got some serious respect from the vendors. The students were also kind enough to keep the salesmen from bothering me too much.

We got back to the boat around 11:30, and it was definitely bed time for me. I’d been up since 5 A.M. I invited the kids who’d gone shopping to join me for sunrise the next day at 6:30, but didn’t really expect anyone to come. I thought I could go prepare for bed, instead I had to patrol the hallways to keep kids from disrupting other passengers.

Tune in later for Day 3!