IBB Vs. Egypt via Business Insider

The big story in U.S. markets right now is the NASDAQ decline. The index fell 2.6% on Friday, and it’s been persistently weak over the last several days.

What’s really going on is that big “momentum” names are getting drubbed, and many of these (Tesla, Netflix, FB, etc.) are traded on the NASDAQ.

The NASDAQ is also where a lot of biotech stocks trade, and the biotechs have been getting hammered.

So what’s the story? All you have to do is look at Egypt.

Here’s a one-year chart of the the biotech ETF IBB (green line) vs. the Egyptian stock market (orange line), via Bloomberg.

For a year, they’ve roughly moved together. They rose last spring, fell in June, rallied hard in February, jumped in March, and then tumbled hard.

Is there an intrinsic connection between biotech stocks and the Egyptian market? Of course not. Both just represent risky areas of the global marketplace that soak up cash in the good times, and then tumble when people get tense.

There’s no “story” that’s worth telling about what’s going on. Nothing specific has happened in tech or biotech or anywhere else. But things always go in waves, and the tides have come back out, leaving certain areas dry once again. That’s the story to watch, and it’s much bigger than any one industry.

via IBB Vs. Egypt – Business Insider. 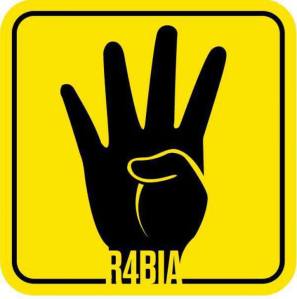 Egypt has passed a law that could sentence anyone who posts this symbol on their Facebook page to five years in prison, according to Arabcrunch and Sharouk News.

Egyptian athletes expected to compete in the Olympics are also banned from flashing the four-fingered symbol, according to the country’s sports minister.

The “Rabia” or “R4bia” symbol is a reference to the deaths of Muslim protestors in Rabia al-Adawiya Square. It is a symbol of support for the now-outlawed Muslim Brotherhood. Rabia means four or fourth in Arabic, and it sounds the same as the name of the mosque that became the center of pro-Muslim protests in 2012.

Following the revolution that deposed former dictator Hosni Mubarak in 2011, the Muslim Brotherhood won a national election in 2012. However, incoming president Mohamed Morsi abrogated so much power to himself that the Egyptian military staged a coup in the summer of 2013. Since then, the Muslim Brotherhood has been banned in the country even though it won the last democratic vote there.

According to a Google translated versions of  Sharouk News, Egyptian police recently posted a warning on Facebook that anyone who posts the R4bia sign will be regarded as a terrorist who supports the Brotherhood, and could be subjected to five years in prison.

Apparently it snowed in Cairo yesterday. I didn’t get any pictures of it, but some people did. Business Insider collected a few of the images. Check them out at their website, too.

t’s snowed in Cairo for the first time in 112 years (according to locals on Twitter). Here’s what it looks like.

I came across this article on Business Insider recently:  Video: Crowds At Beijing’s Xierqi Station. It shows a video (also posted below) and a few explanations of why Chinese public transportation is a challenge.

I take the bus to work every day and every day is a new experience:

There is truly nothing like being stuck on an airless bus in July in rush-hour bumper-to-bumper traffic with 5 dozen other miserable souls who simply must get to work as cheaply as possible. That generally means the bus, which is .4 RMB with a metro card if you go less than 14 stops .8 RMB if you go further than that. 1 RMB without the card. The subway costs only 2 RMB, but can be just as crowded as the video shows. Also, it can be a bit of a hike from some housing developments. Taxis are by far the most expensive, particularly when stuck in rush hour traffic. It can cost close to 30 RMB to get from my apartment to work, a distance of only a few kilometers.

Read our Mission. Find out how you can help us adopt James.